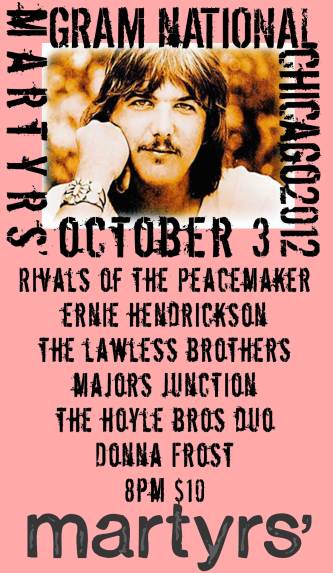 On our fifth year in Nashville, Gram InterNational, devoted to Gram Parsons’ legacy and his induction into the Country Music Hall of Fame, is thrilled to announce its upcoming show at Martyrs’ in Chicago on Wednesday, November 3, tapping into the Windy City’s rich Americanalt scene to present an exciting multi-band one-night “mini festival.”

Why Martyrs’? To quote Martyrs’ owner Ray Quinn about naming the venue that he forged from an old post office on N. Lincoln, “Like a song that writes itself there was a concept in place. Martyrs’ would be dedicated to the musicians who give their life to their art.”  It was the perfect concept for the first Gram InterNational in Chicago.

Most important to Gram InterNational is that the Petition to Induct Gram Parsons into the Country Music Hall of Fame surpassed 7,700 signatures, on the way to our goal of 10,000 signatures by September 19, 2013, the 40th anniversary of Parsons’ death. CMT.com recently posted an article naming three candidates that should be considered for the Hall in the posthumous category, Gram Parsons was one. And Peter Cooper of The Tennessean included him in a group this respected journalist and musician thought overdue for induction.

It’s been an exciting year for those who follow Gram Parsons’ legacy, fans and musicians alike. For example, Michael Bate, who conducted Parsons’ final interview, took his stage play “Grievous Angel: The Legend of Gram Parsons” to Australia for a summer run, and also released the full version of his interview on CD for the first time. Journalist Bob Kealing’s book on Parsons and his Southern roots, “Calling Me Home: Gram Parsons & the Roots of Country Rock,” has just been released by University Press Florida. The Gram Parsons Foundation, begun by Gram’s daughter Polly Parsons to help recovering substance abusers, had its kickoff bash at SXSW with some great music including Eric Burdon, who now lives in Joshua Tree, California, where Gram died.

But the main point of a Gram InterNational Chicago will be to have one heck of a “hump day” party! Looking forward to seeing everyone at Martyrs’ on October 3: join us online at  http://grambashchicago.us.