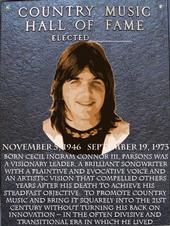 The following was written to CMA criteria and submitted as hard copy with List of Supporters to the CMA, 9/19/08, on the 35th anniversary of Gram’s death and is made available to them updated 24/7 online.

Candidate basically is to be judged on the degree of his/her contribution to the advancement of Country Music and on the indelibility of his/her impact.

other individual or force within that past 40 some years. His indelible impact

can be seen and is seen in the broad scope of all types of country music today.

His contributions, from the International Submarine Band’s “Safe at Home”

(which many critics consider to be one of the great country albums of all time,

and is included in the Library of Congress collection as such),

played the Grand Ole Opry, a milestone the Opry itself marks as being 33 in

their top 80 Opry Moments of All Time), through the groundbreaking “Gilded

Harris, “GP” and “Grievous Angel.” It should be noted that Ms. Harris herself

on numerous occasions credits Gram Parsons for her understanding of and

the Country Music Hall of Fame over a dozen years ago. Please see the comments of the nearly 14,000 individuals so far comprising the List of Supporters (attached and at:

https://www.gopetition.com/petitions/gram-parsons-wall-of-fame-and-petition-to-induct-into-rock-country-halls-of-fame.html) for further substantiation of this observation.

Individuals may be elected to the Hall of Fame. Companies, publications, radio stations and other groups many of which significantly foster Country Music are not eligible for Hall of Fame recognition.

Gram Parsons, although he worked with many distinguished musicians,

including those mentioned above, members of the Flying Burrito Brothers, and

Elvis Presley’s backup band, is presented here for individual consideration as a

country artist; moreover, it is his singular individuality upon which this

Authority is vested in the Electors in identifying the scope of a candidate’s activity in Country Music. The individual may have excelled in a narrow, specific sphere . . . such as songwriting, publishing, musician, recording artist, etc. or may have been active in several areas. In any event, a candidate must have achieved definitive leadership in his/her own field of Country Music activity. However, it is definitely not mandatory to honor the leaders in every activity related to Country Music. A candidate truly must compete with all candidates in all fields, as well as with all candidates in his/her own field.

individual can claim greater and broader excellence than that of Gram

and as a leader, his artistic vision compelling others to help him achieve his

steadfast objective: to promote country music and bring it squarely into the

next century without turning his back on innovation in

the era in which he lived, which often was a divisive and turbulent time. He sought

with gentle kindness, good humor, wit and his art to allow those who would not

otherwise “see the light” to have it shine on them brightly.

The time factor of a candidate’s impact on Country Music is completely flexible. It may cover an uninterrupted span of many years or it may cover two or more distinct and separated time cycles. Conceivably, even a candidate may earn Hall of Fame recognition by one transient act, momentary in time, providing the impact on Country Music is deemed significant enough. Longevity of involvement with Country Music, therefore, will not in itself warrant recognition in the Hall of Fame.

music, Gram Parsons had a profound and now widely recognized influence on

others that continues to this day. More than any other artist of the late 60s and

early 70s, Gram brought a new audience to a deep, genuine, and

direct influence has actually had as great a longevity, if not greater, than any

nominee considering by your distinguished board over the years. I know of no

A most significant criterion in evaluating a candidate will be his/her inspirational effect on others . . . the degree to which he/she multiplies his influence through others to create impact on Country Music far beyond his/her own direct individual contribution.

the 47 years that he’s been gone. The best testament to this are the comments

attached from all over the world, for indeed his influence was arguably more

global in spreading the gospel of genuine American country music throughout

the world than any other country artist in history (again, please reference the

List of Supporters and their countries of origin, also at http://gramparsonspetition.com).

A candidate’s ability to expand the popularity of Country Music is a quantitative virtue. The professionalism of his/her activity is a “qualitative” one. Both quantitative and qualitative criteria are to be considered equally and separately important; conceivably, one may be present without the other.

in the above criterion. Substitute “and.” The key words in this criterion are “a

virtue. Many country stars come and go, some even selling millions of

records. But how many of them leave an indelible mark on the dispersion of

country music to new audiences and expand its reach to any great extent? One

who did and continues to is Gram Parsons. An excellent reference for this is

the List of Supporters with over 13,000 signers and their comments.

so many, seemingly most, have discovered him recently

and express their reverence for his music and

wish to emphasize how it has influenced their own style of country. Then there

are the tribute songs written about him, said to total more than about any other

musician. And the number of books and movies about someone who died at 26 put

him in the same group as Anne Frank, King Tut, and Robert Johnson. While difficult

to quantify with any precision, the numbers of “units” sold since his death has

increased exponentially. There is little to add, except to say that any number

of expert lists, books and reviews put the five albums in particular listed in

years, and qualitative excellence far above most others.

Furthering Country Music by selfless devotion to the interests of others may enhance the candidacy of an individual, but it is not essential to winning. The activities of a candidate may be completely self devoted and still be considered significant enough to warrant recognition.

letter he wrote from Harvard, one of many, to his little sister Avis, for whom he

felt responsible after the death of both parents due to alcoholism. Please

reference David Meyer’s biography (page 163) or other source for this letter,

which is as exquisite in its thought, feeling and artistry as any of his songs. All

who knew Gram knew of his personal devils (a major theme of country music),

but they also attest to his humanity and devotion to those he loved. Again, a

good source who has backed this up many times on the record is Ms. Emmylou

Harris, as well as the likes of Bonnie Bramlett (“Gram was also a catalyst among

fellow musicians. He spread the word. He was our buddy…”) and many, many others.

A candidate is expected to have practiced the highest caliber of professional conduct in order to enhance the public image of both himself/herself and Country Music.

All of the foregoing attest to Mr. Parsons’ caliber of professional conduct. All

who knew him attest to the degree to which he had grown, both personally and

professionally, during the making of those brilliant final albums. His music

formed in the 60s and early 70s. He would preach the truth of country music to

anyone who would listen, and often did. He would walk into an otherwise

country fans. He proudly wore the same suits as Mr. Porter Wagoner, not

ironically, but out of a deep respect for the music he loved (indeed, he was one

of Mr. Nudie’s best friends). Had he lived, he would have continued to enhance

the public image of country music as many of his proclaimed followers have.

The selection process is not a judgment of personal morals and behavior, providing the latter do not negatively affect the professional conduct of the candidate and the public image of Country Music.

no one will know every detail of New Year’s Day 1953. Gram Parsons lived in an

undeniably divisive time, a world between the worlds.

As has been stated, everyone knew Gram had his devils. As his beloved Louvin Brothers

said (and sometimes exemplified), “Satan Is Real.” But I am not going to simply write off this criterion by

death fighting his devils. Science has shown that addiction is also real,

and is caused by a defect in a gene. Both of Gram’s biological parents were

(again, see Meyer’s biography and others). True, the era he had no choice but

to live in didn’t help, but to judge Mr. Gram Parsons negatively based on an

addictive behavior would not only rule out Hank, Sr., but also many other

science. No, Gram Parsons believed wholeheartedly in his art, in country music, in

what William Faulkner called the only thing worth writing about: the human

heart in conflict with itself.

11 comments on “Is Gram Parsons Eligible? A Look Based on CMA’s Own Criteria”